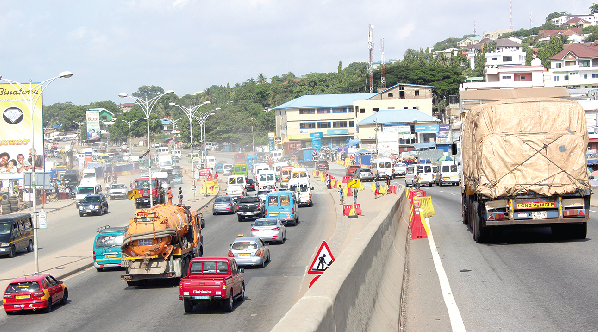 The section was closed to traffic on May 1, this year, to make way for the construction of a drainage.

The opening of the road came as a huge relief to road users who had to endure the inconveniences caused by hectic vehicular traffic when sections of the road were blocked.

At a point, the situation was so bad that commuters from Kasoa to Accra had to spend about three hours in traffic during rush hours.

Following concerns raised by the travelling public, a Sanitation Engineer and Contractor for the Greater Accra Metropolitan Area (GAMA) Sanitation project, Mr Gabriel Engmann, gave an assurance that work was being expedited to open the road to the public on Saturday, June 2, 2018 ahead of schedule.

When the Daily Graphic visited the project site at Mallam Junction at about 9 a.m. last Saturday, the team observed that the road had been opened to traffic.

There was a sharp contrast between the traffic situation at the beginning of last week and Saturday, as vehicles were moving without any delay.

It was observed that the pressure on personnel from the Motor Traffic and Transport Department (MTTD) of the Ghana Police Service who managed traffic had gone down, with just two of the police officers spotted around the area.

At the time of the visit, some civil works were still ongoing to put the road to its original shape.

The workers were working on the peripherals and restoring the medians of the road.

Dust suppression mechanisms were also being put in place to minimise the impact of dust from the construction site.

Mr Engmann told the Daily Graphic at the project site that work was being done to smoothen the about 500-metre portion of the road that was cut for the construction of the drain.

“We opened the road to the public last Friday, June 1, and traffic is in order now.

“We are trying our best now to be on top of the environmental impact situation in terms of the dust that is generated because of the exposed surfaces. We want to minimise the effect of the dust on visibility and the health of people who live around the project site,” he said.

He added that most of the work to smoothen the surface of the road would be done during the night when traffic was low.

Asked whether the project would be completed in time, he said: “The contract shows that this project should be completed and ready for handover by the end of July but we are anticipating that all remedial and peripheral works will be done ahead of this deadline.”

Mr Engmann urged members of the public to desist from dumping refuse into drains.

He urged metropolitan, municipal and district assemblies in GAMA to enforce Sanitation bye-laws to check the malpractice.