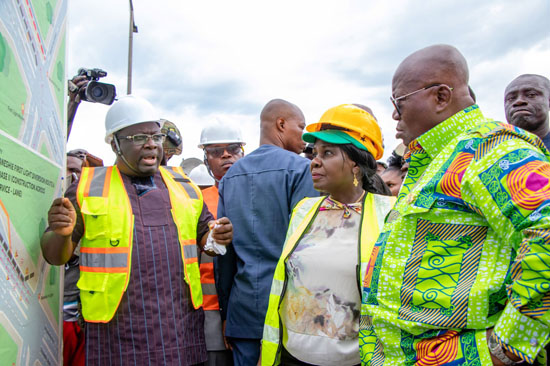 At Kaneshie First Light junction, where an emergency priority storm drain is being constructed, the project manager, Mr. George Asiedu (left), told President Akufo-Addo that the 630-metre-long storm drain will help end the perennial flooding that occurs in Kaneshie and its environs.

President Nana Addo Dankwa Akufo-Addo, on Tuesday, inspected ongoing dredging works on the Odaw river, and the construction of a storm drain at Kaneshie First Light in Accra.

The Kaneshie First Light storm drain project is aimed at helping to alleviate the perennial flooding at the place.

The Project is being funded by the World Bank.

The site engineer on site, Mr. Wise Ametefe, told President Akufo-Addo that the dredging works currently ongoing are not limited to the Odaw River only, but to the Korle Lagoon and to the estuary.

Upon completion of the project, the site engineer stated that a number of recreational facilities will be constructed on the site of the Odaw River, as part of the Lower Korle Lagoon Redevelopment Project, and urged residents living around the River to desist from throwing refuse into the river, as it has made the process dredging quite difficult.

Mr. Wise Ametefe indicated further that dredging works will be done at Caprice, Avenor, and Agbogbloshie, all in Accra, and in the Korle Lagoon as well.

The site engineer assured President Akufo-Addo that the dredging of the Odaw River will be completed in 18 days’ time, to which the President retorted, “I will come back in 18 days to check”. 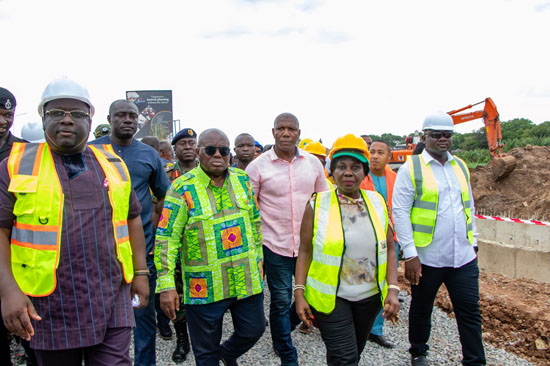 At Kaneshie First Light junction, where an emergency priority storm drain is being constructed, the project manager, Mr. George Asiedu, told the President that the 630-metre-long storm drain will help end the perennial flooding that occurs in Kaneshie and its environs.

“It is heartwarming to note that, after Monday’s heavy downpour, there was no flooding at Kaneshie and its environs, even though the work has not been completed. Indeed, the project should have been completed by 15th April, but it is now set to be completed in June this year,” Mr. Asiedu added.